Hair loss, also known as alopecia or baldness, refers to a loss of hair from the head or body. Baldness can refer to general hair loss or male pattern hair loss.

Hair loss and hypotrichosis have many causes including androgenetic alopecia, fungal infection, trauma (e.g., due to (trichotillomania), radiotherapy, chemotherapy, nutritional deficiencies (e.g., iron deficiency), and autoimmune diseases (e.g.,alopecia areata). Hair loss severity occurs across a spectrum with extreme examples including alopecia totalis (total loss of hair on the head) and alopecia universalis (total loss of all hair on the head and body).

Baldness is the partial or complete lack of hair growth, and part of the wider topic of “hair thinning”. The degree and pattern of baldness varies, but its most common cause is androgenic alopecia, alopecia androgenetica, or alopecia seborrheica, with the last term primarily used in Europe. 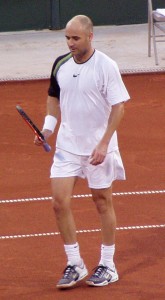 Symptoms of hair loss include hair loss in patches usually in circular patterns, dandruff, skin lesions, and scarring. Alopecia areata (mild – medium level) usually shows in unusual hair loss areas e.g. eyebrows, backside of the head or above the ears where usually the male pattern baldness does not affect. In male-pattern hair loss, loss and thinning begin at the temples and the crown and either thins out or falls out. Female-pattern hair loss occurs at the frontal and parietal. A case of mid-frontal baldness: Andre Agassi.

People have between 100,000 and 150,000 hairs on their head. The number of strands normally lost in a day varies, but on average is 100. In order to maintain a normal volume, hair must be replaced at the same rate at which it is lost. The first signs of hair thinning that people will often notice are more hairs than usual left in the hairbrush after brushing or in the basin after shampooing. Styling can also reveal areas of thinning, such as a wider parting or a thinning crown.

A substantially blemished face, back and limbs could point to cystic acne. The most severe form of the condition, cystic acne arises from the same hormonal imbalances that cause hair loss, and is associated with dihydrotestosterone production. Seborrheic dermatitis, a condition in which an excessive amount of sebum is produced and builds up on the scalp (looking like an adult cradle cap) is also a symptom of hormonal imbalances, as is an excessively oily or dry scalp. Both can cause hair thinning.

Hair thinning and baldness cause psychological stress due to their effect on appearance. Although societal interest in appearance has a long history, this particular branch of psychology came into its own during the 1960s and has gained momentum as messages associating physical attractiveness with success and happiness grow more prevalent.

The psychology of hair thinning is a complex issue. Hair is considered an essential part of overall identity: especially for women, for whom it often represents femininity and attractiveness. Men typically associate a full head of hair with youth and vigor. Although they may be aware of pattern baldness in their family, many are uncomfortable talking about the issue. Hair thinning is therefore a sensitive issue for both sexes. For sufferers, it can represent a loss of control and feelings of isolation. People experiencing hair thinning often find themselves in a situation where their physical appearance is at odds with their own self-image and commonly worry that they appear older than they are or less attractive to others. Psychological problems due to baldness, if present, are typically most severe at the onset of symptoms.

Hair loss induced by cancer chemotherapy has been reported to cause changes in self-concept and body image. Body image does not return to the previous state after regrowth of hair for a majority of patients. In such cases, patients have difficulties expressing their feelings (alexithymia) and may be more prone to avoiding family conflicts. Family therapy can help families to cope with these psychological problems if they arise.